Trending
You are at:Home»Entertainment»‘Stanley & Iris’ on Blu-ray from Twilight Time

This 1990 drama stars Jane Fonda and Robert De Niro. “Stanley & Iris” is a drama that takes viewers into the lives of two good-hearted people who are struggling to make ends meet.

Fonda is Iris, a mother of two trying to make a living working in the local factory while supporting her young son, teenage daughter, and housing her sister and brother-in-law who themselves are down on their luck. Iris’ husband, the love of her life, passed away and she has no intention of finding another man.

Stanley is a cook in the factory’s mess hall. He’s barely getting by and living with his father. Stanley is hiding a secret. He cannot read or write. He is a highly intelligent man who slipped through the cracks all his life and is now paying the price.

Stanley struggles after being fired. He takes any job he can find, including as a ditch digger and a bathroom cleaner. Then he gets up the nerve to ask Iris to teach him to read and write. He knows that they are the key to him succeeding in life.

Iris’ compassion for people is huge and she takes on this task with fervor. She works in the factory in the day and at night teaches Stanley in her kitchen while ironing and doing other tasks.

This is a movie about two kind and generous people working hard to make their lives better. Iris has to deal with her grief while at the same time her family dynamic is changing as her teenage daughter realizes she is pregnant. And Stanley has his own emotional setbacks besides not being able to read. He cannot get a decent job so he has to put his father in a home for the aged to keep him fed with a roof over his head. That in itself tugs at his heart and is what eventually gives him the determination to pull himself out of the gutter and learn to read. Reading and writing are fundamental for getting ahead in life.

“Stanley & Iris” is a melancholy story until the end. It’s well acted, and while the majority of the film is rather dim, the ending is uplifting. 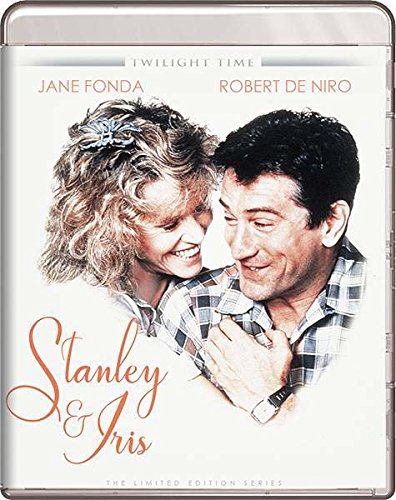