Trending
You are at:Home»Entertainment»Peyton Place on Blu-ray from Twilight Time

If you watched the HBO series “Big Little Lies,” you saw plenty of startling stories that were hidden behind the doors in the California town of Monterrey. Well, that was nothing compared to what goes on in the New England town of Peyton Place. The novel penned by Grace Metalious shocked readers in the 1950s. In 1957 the movie “Peyton Place” became a hit with audiences.

Starring Lana Turner as a single mother with a repressed view of sex, the story follows several other characters as they maneuver their lives in this little narrow-minded town. The next generation is now coming of age and has more open ideas about life. Russ Tamblyn, Hope Lange, Arthur Kennedy, Terry Moore, Diane Varsi, David Nelson, Lee Philips, and Lloyd Nolan lead the cast in this film that has it all: sex, suicide, incest, murder, and a lot more.

While the younger generation in Peyton Place expands their morals and sees the world in a broader sense, their parents are still stuck with their stodgy views and have no desire to alter anything.

Some of the characters and events had to be modified for the standards and practices of the time, yet the film did stretch the boundaries of what had been the norm of the 1950s. In 1939 Clark Gable shocked movie audiences with the words, “Frankly, my dear, I don’t give a damn.” In 1967 audiences were once again stunned with the stories in “The Graduate.” Between these two memorable films was “Peyton Place.”

With illegitimacy, rape, abnormal maternal behavior, suicide, and murder, the town of Peyton Place has been hiding its dirty secrets. But when the trial of a young girl who is accused of murder stirs up the people, the secrets and narrow-mindedness bubble to the surface and the folks realize what has been happening. It’s definitely a shock for them.

The Blu-ray edition includes a fascinating bonus about the backstories of the film. The novelist discusses her experience with the story and there are facts about the casting and how the filmmakers had to adjust the novel for the big screen. The movie was a big hit and garnered 9 Academy Award nominations, yet didn’t win a single one. From 1964-1969 the TV series captured the attention of not only fans of the film but also new viewers and introduced Ryan O’Neal and Mia Farrow to the world.

“Peyton Place” is an interesting and well-acted movie that has held up over time. 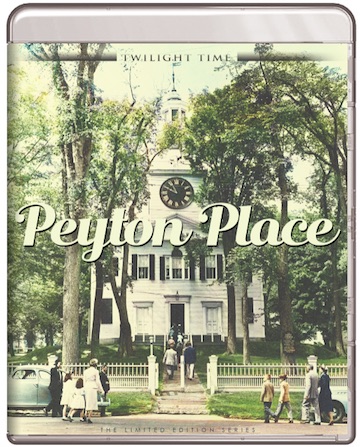