Filmed mostly on location, “Sayonara” is a dramatic film of life and love in Japan after World War II. The story takes place only ten years after Pearl Harbor with tensions still on edge. Marlon Brando, Miiko Taka, Red Buttons, James Garner, and Miyoshi Umeki star in this tragic tale of prejudice with Japanese customs and principles woven into the story.

Brando is Air Force Major Gruver, an American from the South who is following in his father’s footsteps in the military. Kent Smith is General Webster, is anxious for Gruver to marry his daughter Eileen (Patricia Owens), so he reassigns the ace pilot to Japan from Korea so the two can grow their relationship.

Joe Kelly (Buttons) is one of Gruver’s men and a friend of the Major. Kelly marries a Japanese woman (Umeki) over the objections of Gruver and the military. The law at the time does not allow American servicemen to bring their Asian wives back to the states. Knowing this, and knowing the prejudice the couple and their children will face, they start their lives as a married couple in Japan. After seeing how much in love the two are, Gruver becomes an advocate for the couple. And eventually he too falls for a Japanese woman (Taka) and breaks up with the General’s daughter.

Garner is Captain Bailey, a man on the side of love and marriage, and the conduit between the lovers to keep everyone content and in good standing. But that proves a challenge when the military comes down harder on mixed-race couples.

With the title song by Irving Berlin and the score by Franz Waxman, the music reflects the Japanese country and people, and combine that with the scenery it gives viewers a window into the Japan of 1951. Joshua Logan directed this film based on the book by James Michener.

“Sayonara” is 147 minutes long and filled with emotions. Red Buttons won the Academy Award for “Best Actor in a Supporting Role,” Miyoshi Umeki won for “Best Actress in a Supporting Role, “ and the film garnered two additional Oscars. James Garner won the Golden Globe for “Most Promising Male Newcomer.” Had he been farther along in his career, the main character would have been a perfect fit for Garner, but being Brando was already an established actor and box-office draw, he got the lead. 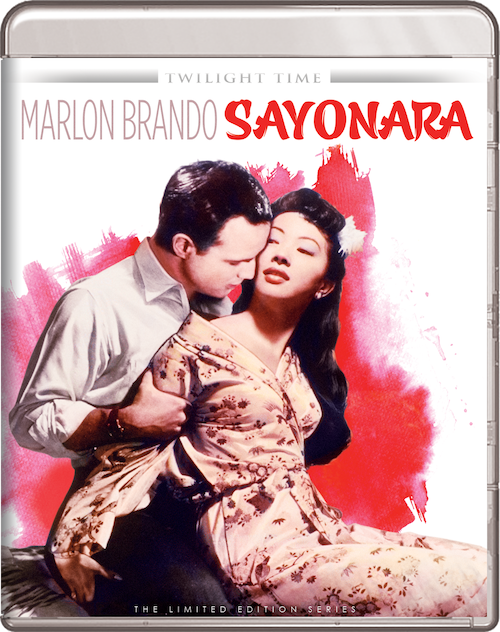 This limited edition Blu-ray from Twilight Time includes a booklet about the movie and the story.