The 1959 movie “Gidget” was based on the book by Frederick Kohner, which was based on the exploits of his daughter Kathy who took up the sport of surfing. Sandra Dee inhabits the role of Gidget, aka Frances (Francie) Lawrence, in the movie that started a slew of surfer films, and James Darren is the singing and surfing Moondoggie.

Tomboy Francie loves swimming and activities, except for the activity of “man-hunting” enjoyed by her girlfriends. She’s a straight-A student who has no interest in the opposite sex. However, during the course of the summer, for the first time in her life Francie is romantically attracted to a man. Moondoggie is the object of her affections, but it takes the entire summer – and the length of the movie – for him to realize he is also attracted to her.

Being a film of the fifties, the visuals are not what we would expect from a surfing movie of today. The actors didn’t have to actually surf. But that doesn’t take anything away from the film. It is still a story about the friendship between Francie and the guys in the group, and the start of the loving relationship between Gidget and Moondoggie that has remained in the hearts and minds of viewers for over 60 years. Holy cow, it’s been over 60 years since this couple was introduced to viewers but their characters – and names – have remained part of our pop culture.

Cliff Robertson co-stars as Kahuna, the head of the group. Joby Baker, Tom Laughlin, Doug McClure, Burt Metcalfe, and Robert Ellis play the rest of “the crew” with Arthur O’Connell and Mary LaRoche as Gidget’s parents. Darren sings the title song and a sentimental love song in the film, and The Four Preps appear in a scene singing their hit song “Cinderella.”

The first time anyone watches the movie they will probably be surprised by the little plot twist that has hints throughout the film. Even if you know what is coming, it’s still cute to watch the first meeting between Frances Lawrence and Jeffrey Matthews.

Even though there were two more feature films, television series, and made-for-TV movies, the original movie is still the benchmark for the characters. It is filled with music, antics, and a lot of fun. 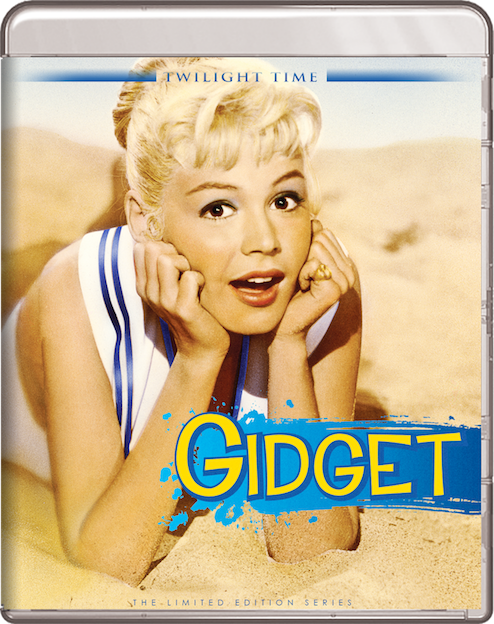 This new Blu-ray edition from Twilight Time includes not only the fun film about Gidget, Moondoggie, and the crew of surfer dudes (Kahuna, Stinky, Lover Boy, Lord Byron, Hot Shot, and Waikiki), but it also has the original movie trailer and a booklet about the movie and making the film.