Trending
You are at:Home»Entertainment»To Whom it May Concern available on DVD

Nancy Kwan has had an interesting life, to say the least. This Eurasian woman stole the hearts of moviegoers in her first two films and changed the face of Hollywood. (No pun intended.) “To Whom it May Concern” is the story of Kwan’s life and career.

In 1960 Kwan starred in her first acting role alongside William Holden in “The World of Suzie Wong.” Kwan had set her goal to be a ballet star and had even attended the Royal Ballet School in England, but when the opportunity to act unexpectedly presented itself, her life took a different path. A year later she became an adored actress by men and women in the musical “Flower Drum Song.”

Up until this time, Asian characters were played predominantly by Caucasian actors. It was the norm for Hollywood. But Kwan changed that.

As her career in Hollywood continued, a long way from her home in Hong Kong, Kwan took several different kinds of roles. In this documentary she discusses her characters and her co-stars.

Not only is her career highlighted, but also her personal life. Kwan married three times, all to Caucasian men. She had one son and his story is very much a part of this film. His story will affect viewers as she describes their relationship, his life, and his death.

Even though her main career highlights were her first two films, Kwan starred opposite many A-list stars in her other works: Dean Martin, Robert Goulet, Dick Van Dyke, Tony Curtis, David Carradine, and more. Her love of acting and her work ethic would not allow her to quit. She continues on even though it is most probable her future films will not attain the major success of her first two movies.

This documentary is enlightening and heartening. Kwan is an interesting woman whose story is not well known. Viewers will see a different side of her as she uncovers the good and the bad in her life. It is definitely a touching film and something that Kwan has wanted to bring to light. Her fans will be impressed by her candor and her emotions as she takes them through the ups and downs of her life and career. 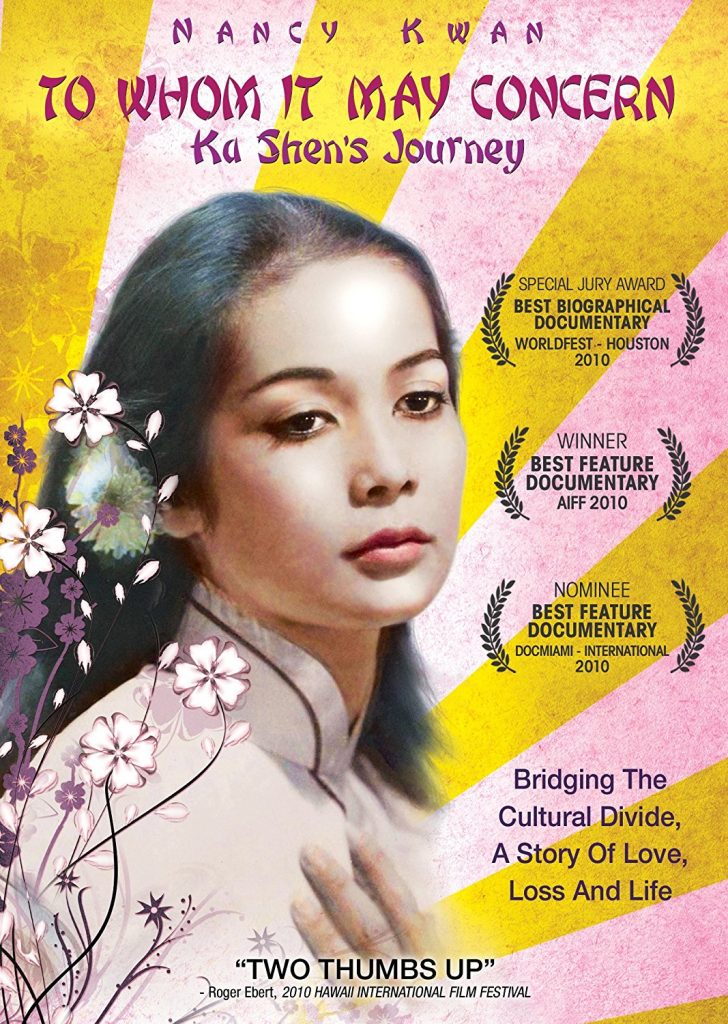 “To Whom it May Concern” has been highly praised and is a story that will open the eyes of movie fans and those who especially enjoy the acting of Ms. Kwan.